This is my first “model kit” that I will work after years of not doing one. I’ve spent quite some time when I was young to do model kits and kit bashing.
I always had in my mind the idea to rebuild an Imperial Star Destroyer (ISD) from Star Wars. I really love its shape, the details. I owned old kits like MPC one of the ISD, same for the Millennium Falcon and others but ending “losing them”.
Then recently, I wanted to own again an ISD. I looked at the kit and all the new ones doesn’t look nice, too small, not enough details, or difficult to find or very expensive. Then why not doing my own, using my 3D printers.

I was also very lucky to visit the Star Wars identities exhibition in Paris and damn!! The ISD Avenger was in front of me. I took a bunch of photos and when back at home, I have been able to rebuild it through a 3D scan (I used the photos to produce the 3D scan). I had most of the references I was looking for.

I’m currently at the early stages of the production: looking to the proportions, building the main volumes. Then when everything will be done, I’ll do a test print of the assembly, then I’ll start the details part. I need to specify that I’m trying to be accurate for most of it, but I’m not aiming to produce an exact replica.
If you want to check my photo references, here is a link. You can watch them online and download the high resolution ones (18 Mpixels)

Now let’s talk a little bit of the scan and main part… First, the result of the dense cloud points of the scan. You can see on the left and right some remaining parts of the other iconic SW ships that I had to clean, remove. Just below, the resulting 3D geometry and the textures applied on it. 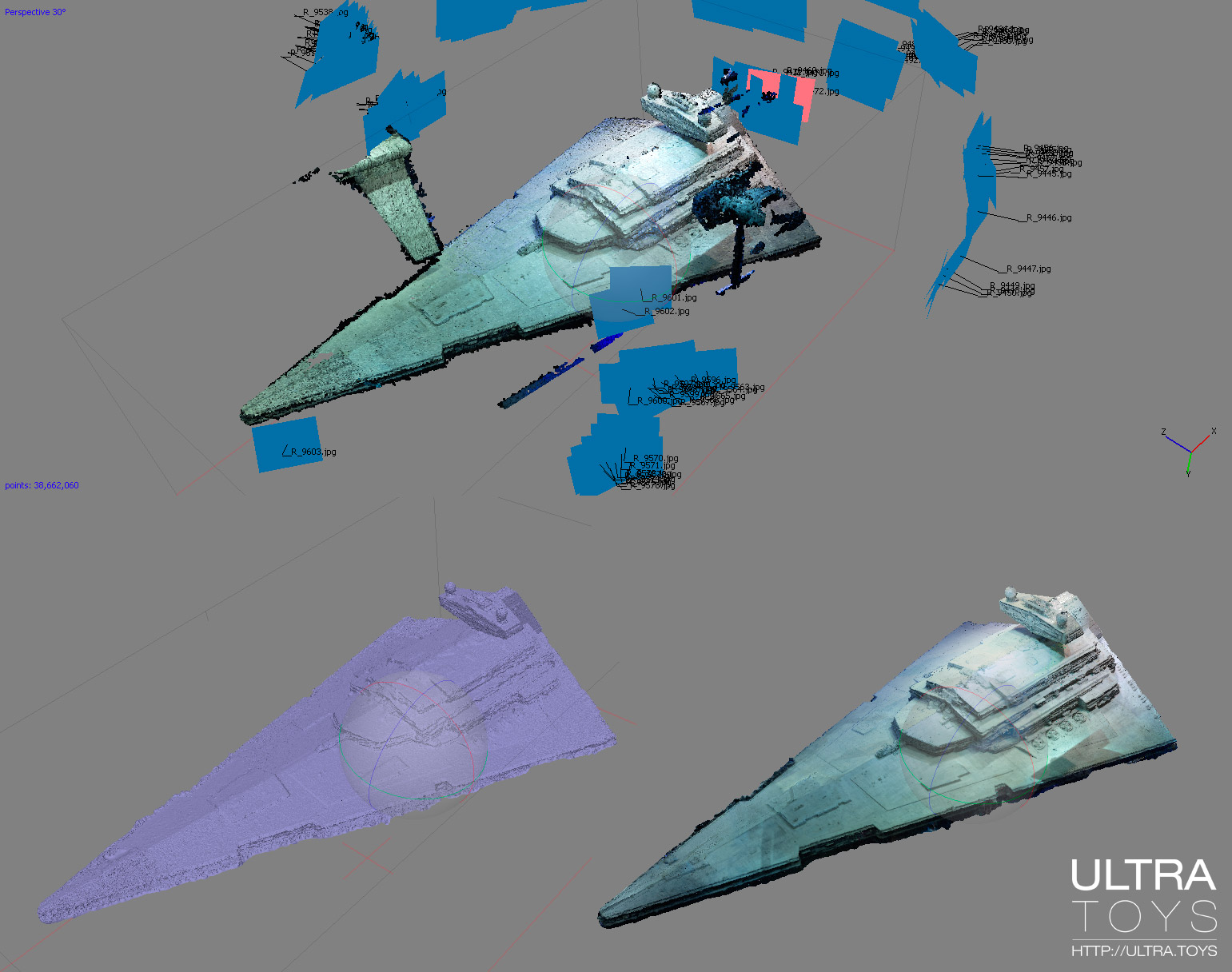 Some close up. It very far to be as good as the original one, but enough to be very helpful and being able to better understanding the shape while building it. You can see just below a closeup of the geometry. It’s very ugly and no way to reuse that for any kind of details. 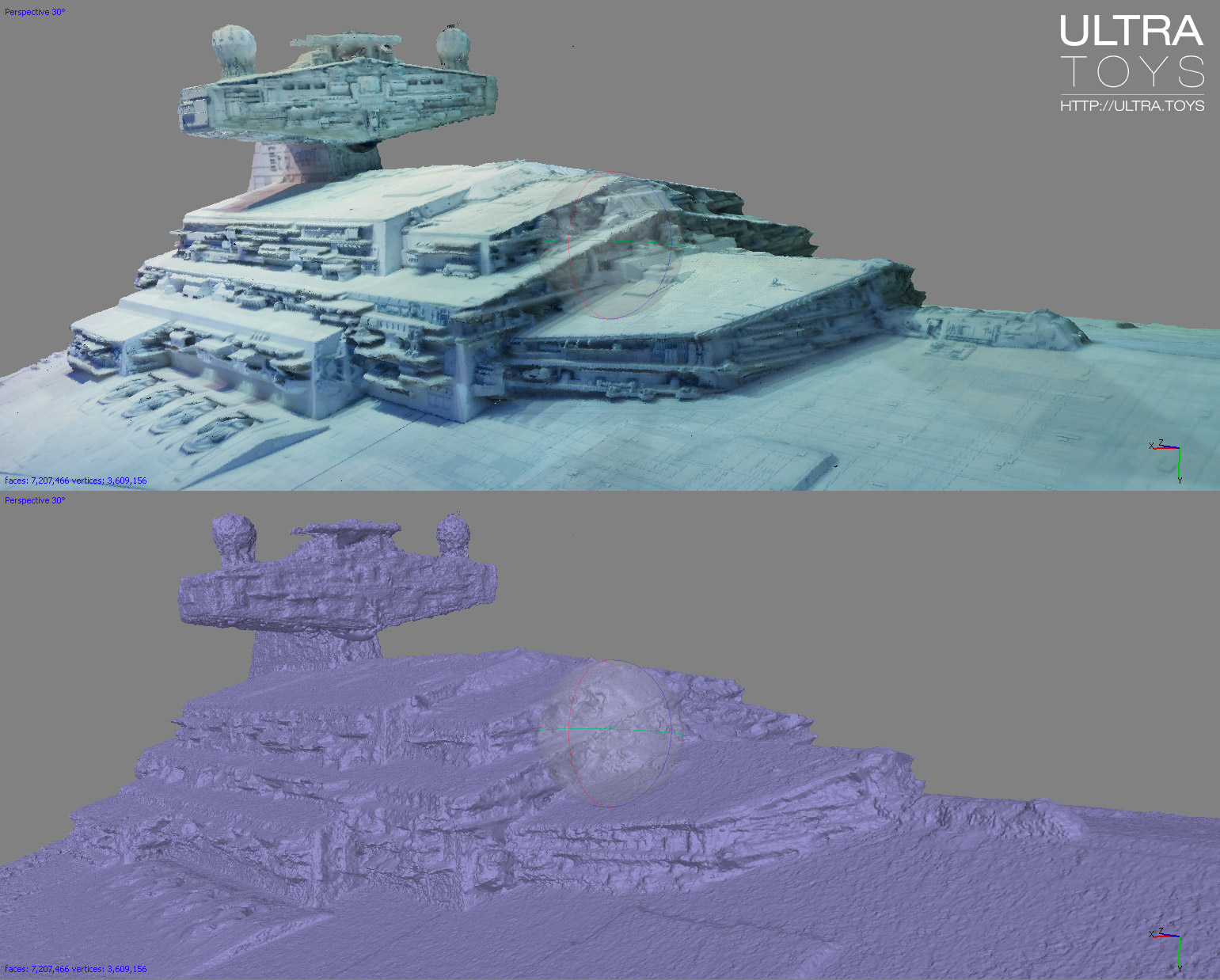 Another example of parts which won’t be so much useful: because the light conditions were horrible at the exhibition, it was impossible to do a scan in good conditions. The second part of the screenshot is the dense cloud points and it has too much holes. 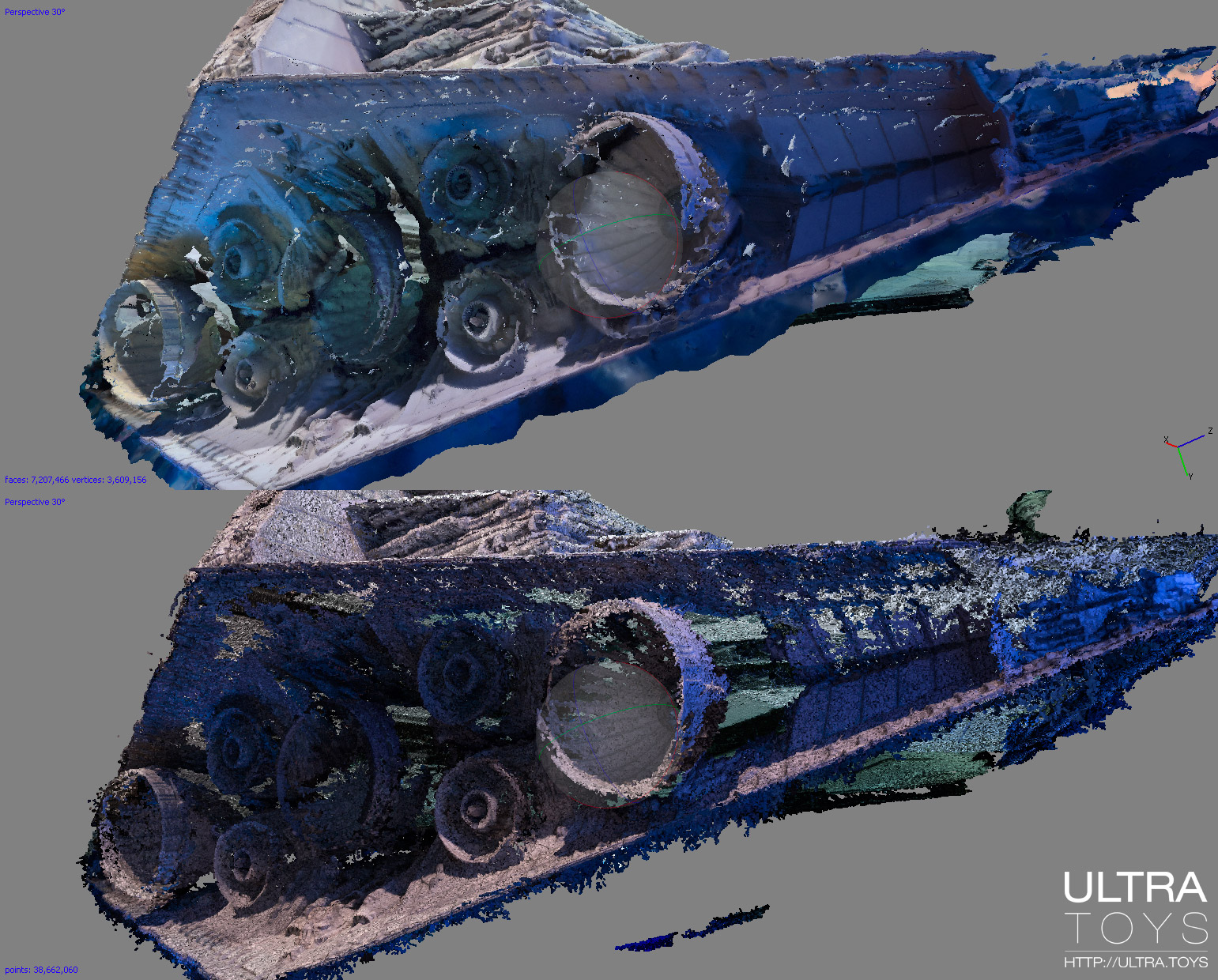 And this is the current stage. Like I, said in introduction, it’s only the first steps of building the main volumes. (Note: reactors are just place holders) 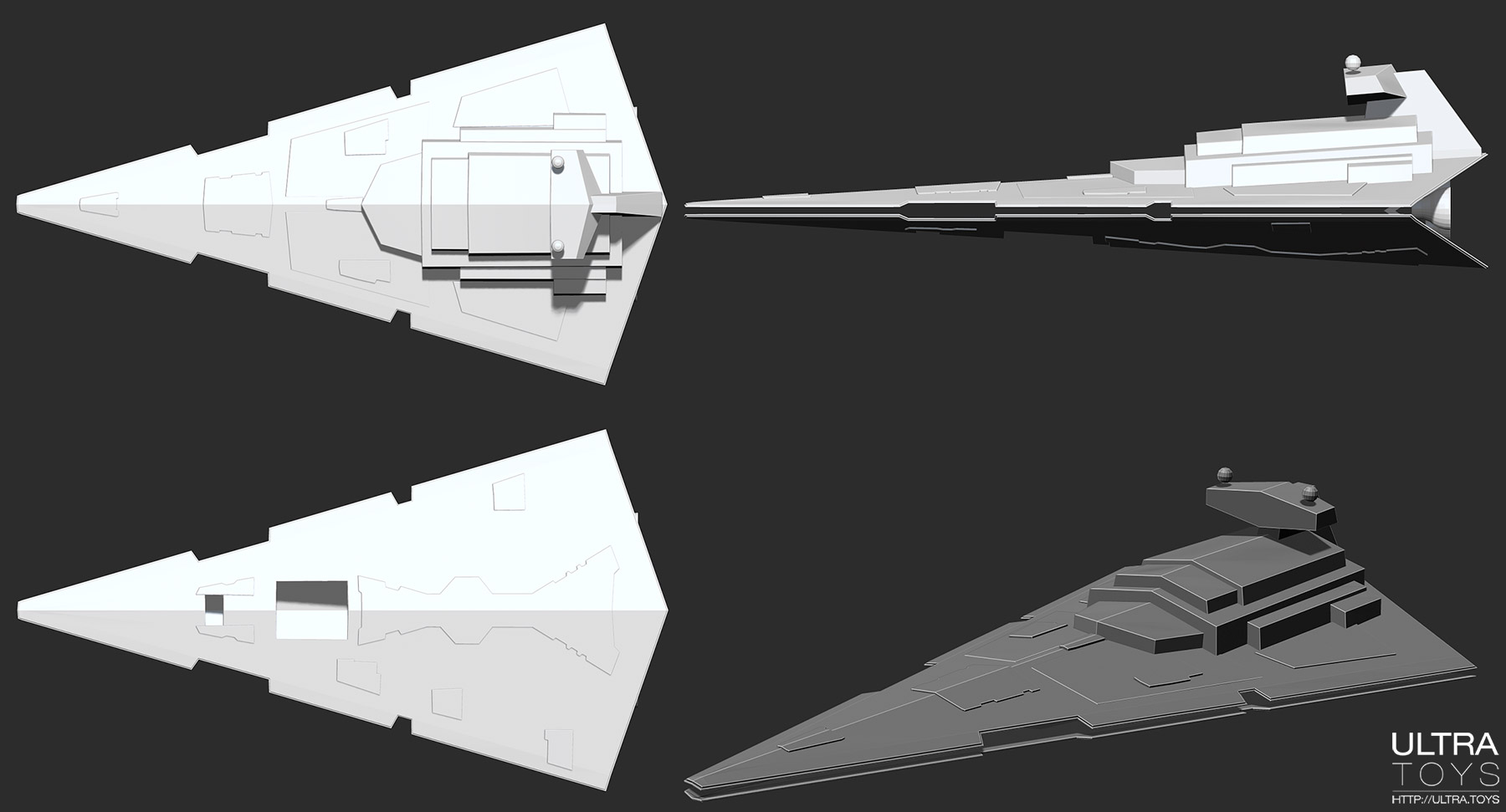 I found some time to start building some detailed parts. It’s not that much, but it helps me anticipating what will be long or not. 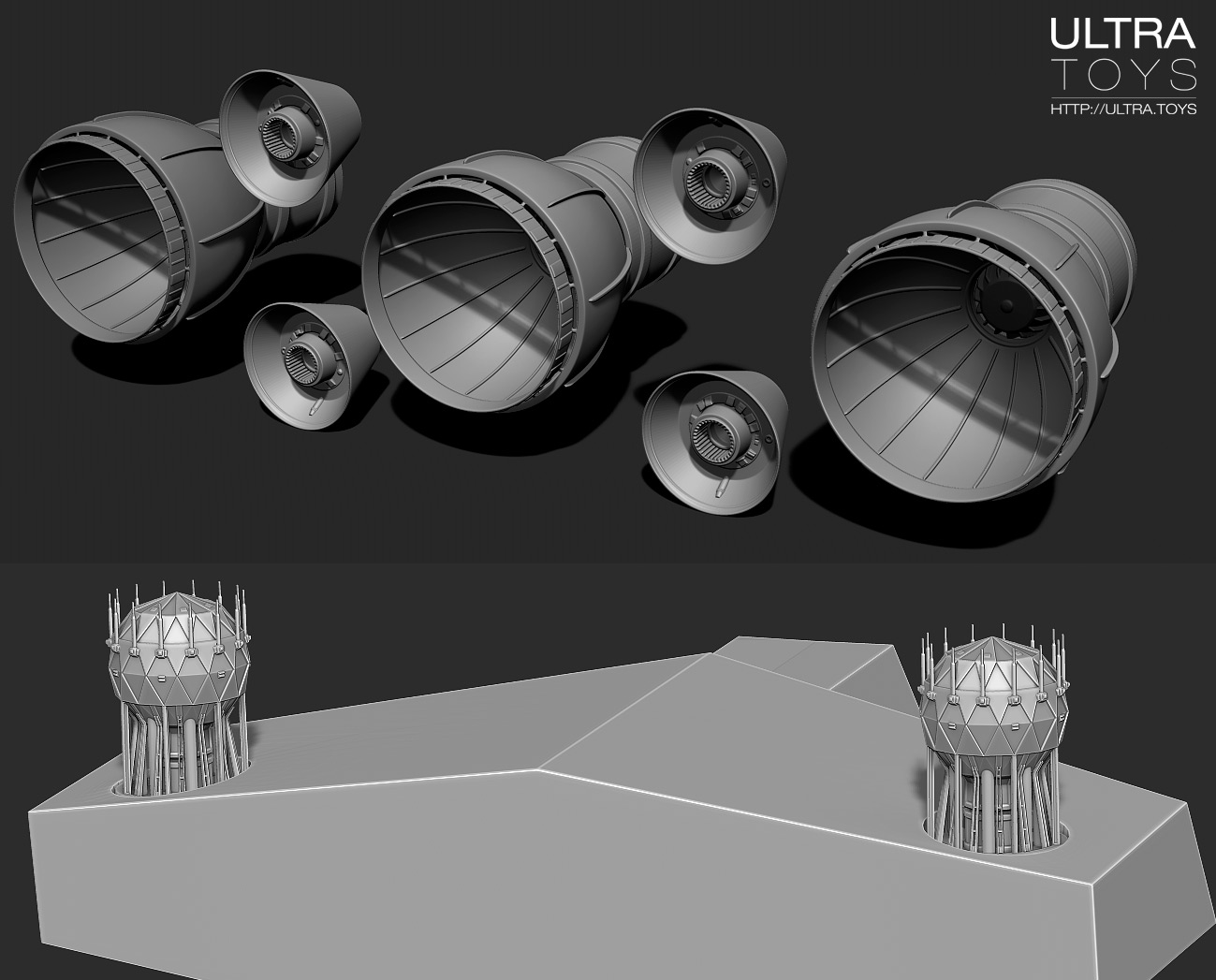 I started to do some test print and on the shields generators, I had to increase the thickness of the small antennas. At this 1/2000 scale, it’s really small and even if the printer has been able to print them, they are way too thin…

I decided to go from scale 1/2000 to 1/1600. If I want to secure some part for 3D printing as they are tiny, it’s better to increase slightly the whole model scale. Then it will be now 100 cm and not 80cm anymore.
It is not visible yet, but I had to edit the reactors and shield generators as I had multiple 3D printing issue, especially with the shield and their small antennas. I’m also done with the Turbolaser batteries with their tiny canon. 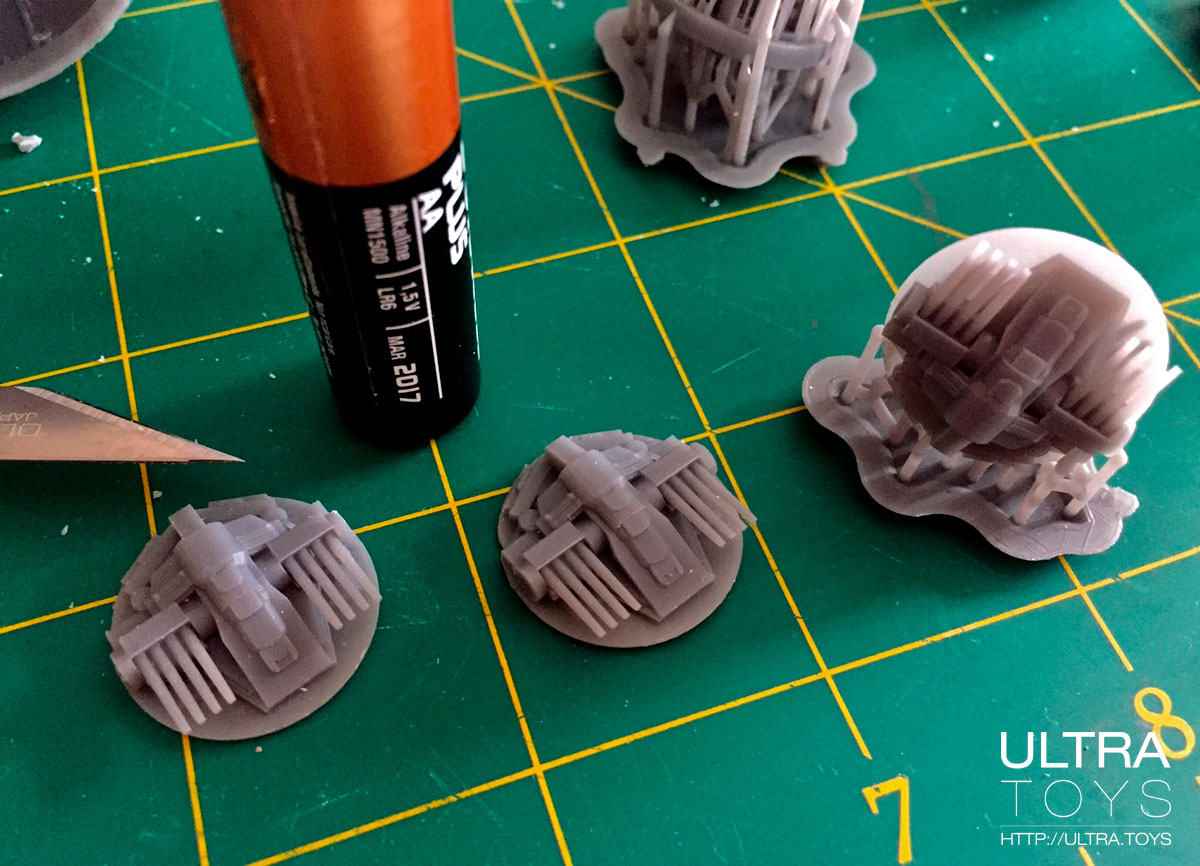 I also did a test print of the field generators and their tiny antennas… They are slightly bended because I made the model falling on the side..  But i’m pretty happy with the quality! You can see on the top left the main engine reactor. 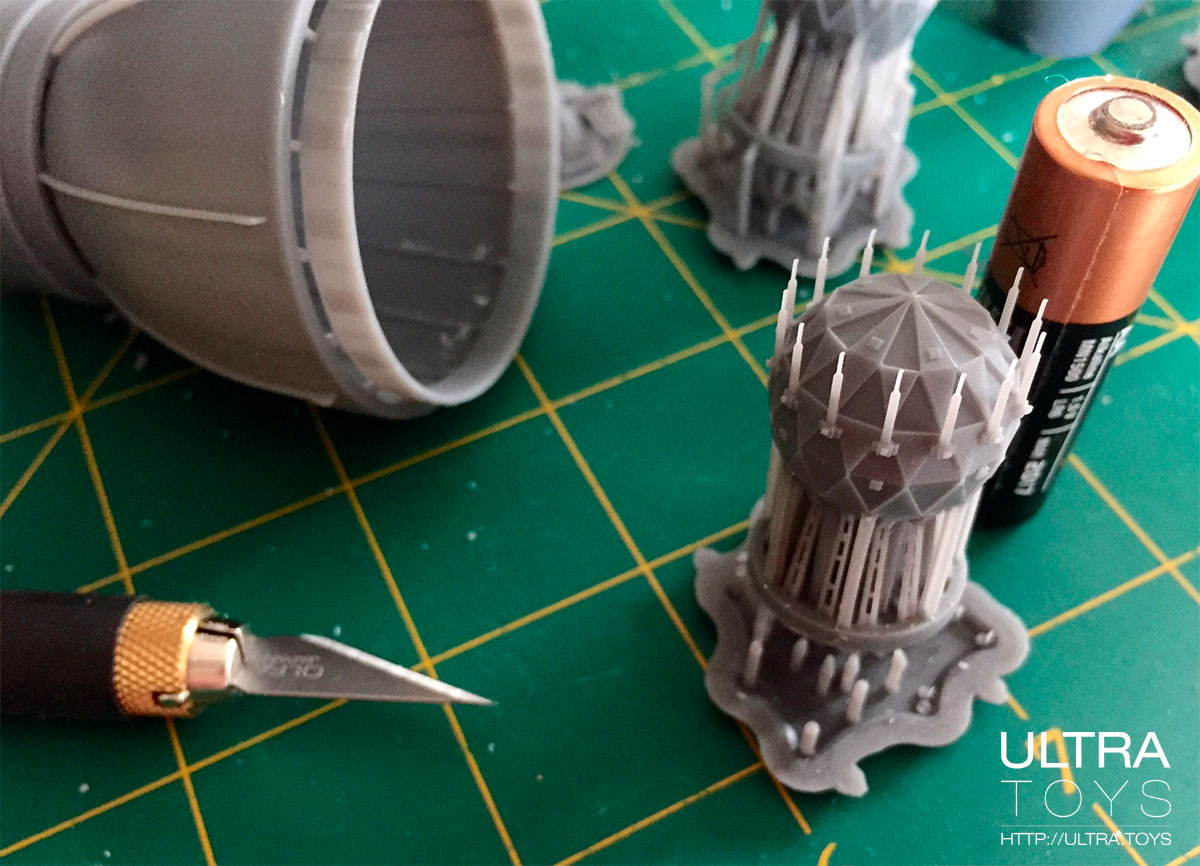 I’m deadly lacking of free time to work on it. And also, it’s a very time consuming process as I’m trying to stick as much as possible to the original movie model. I should add way more details soon as I prepared multiple parts just for that. I’m trying for now to finish the core of the engine part. 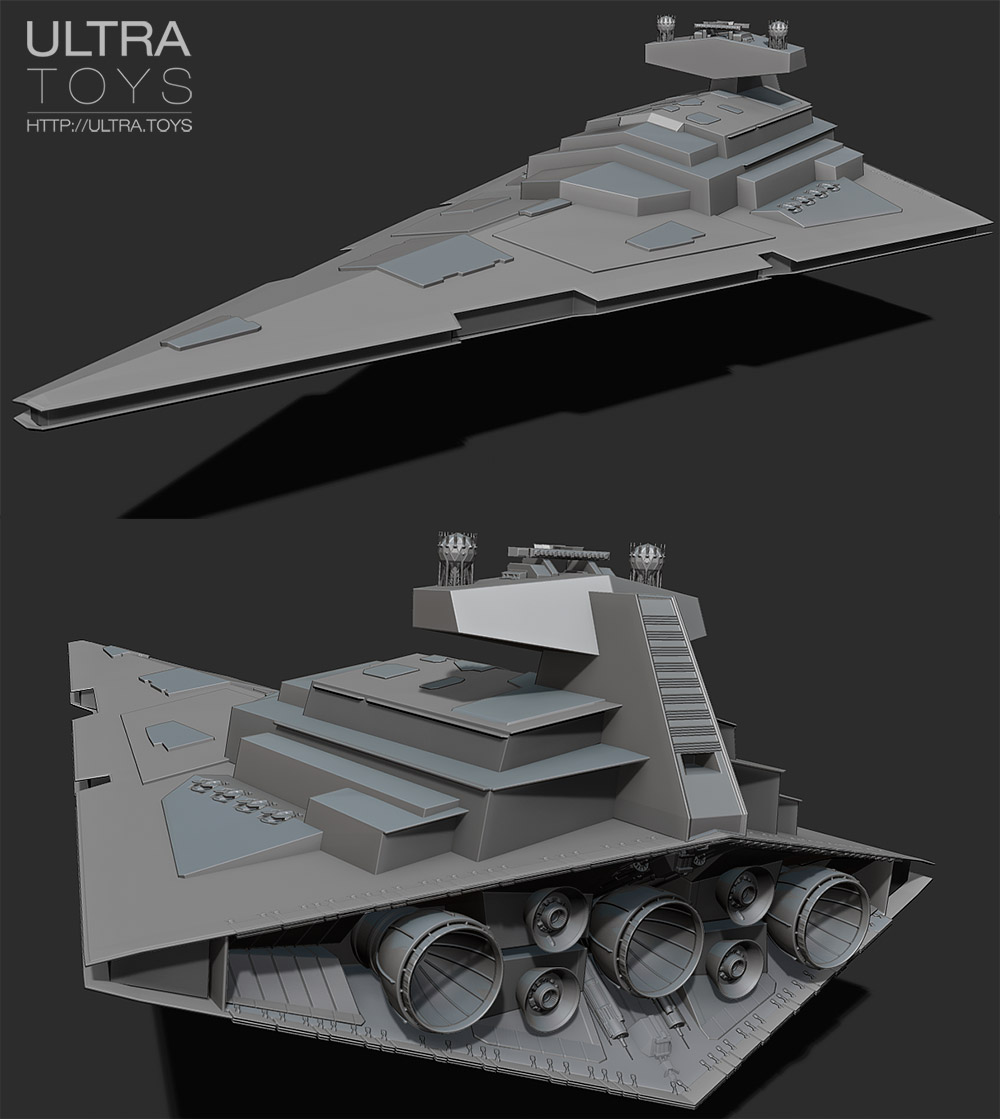 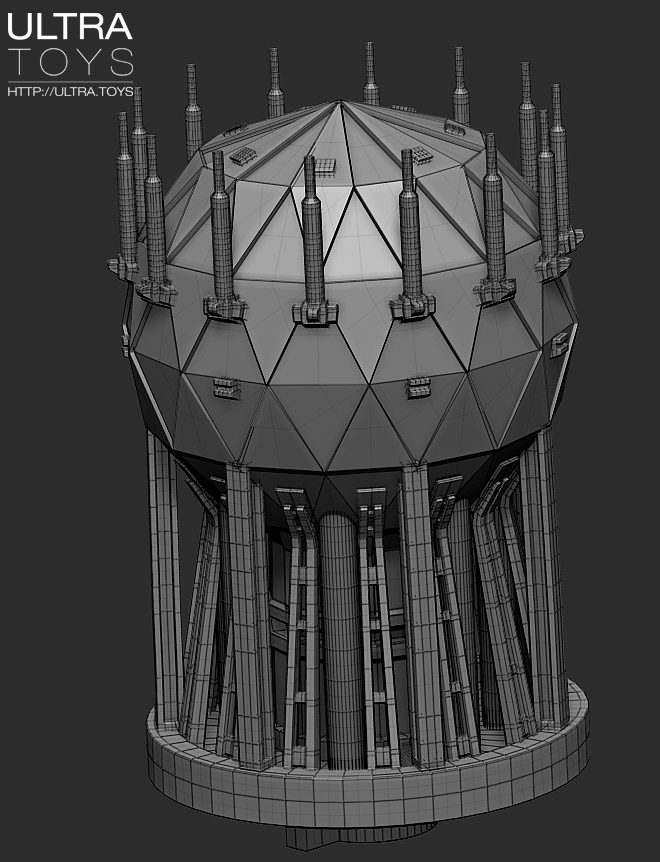 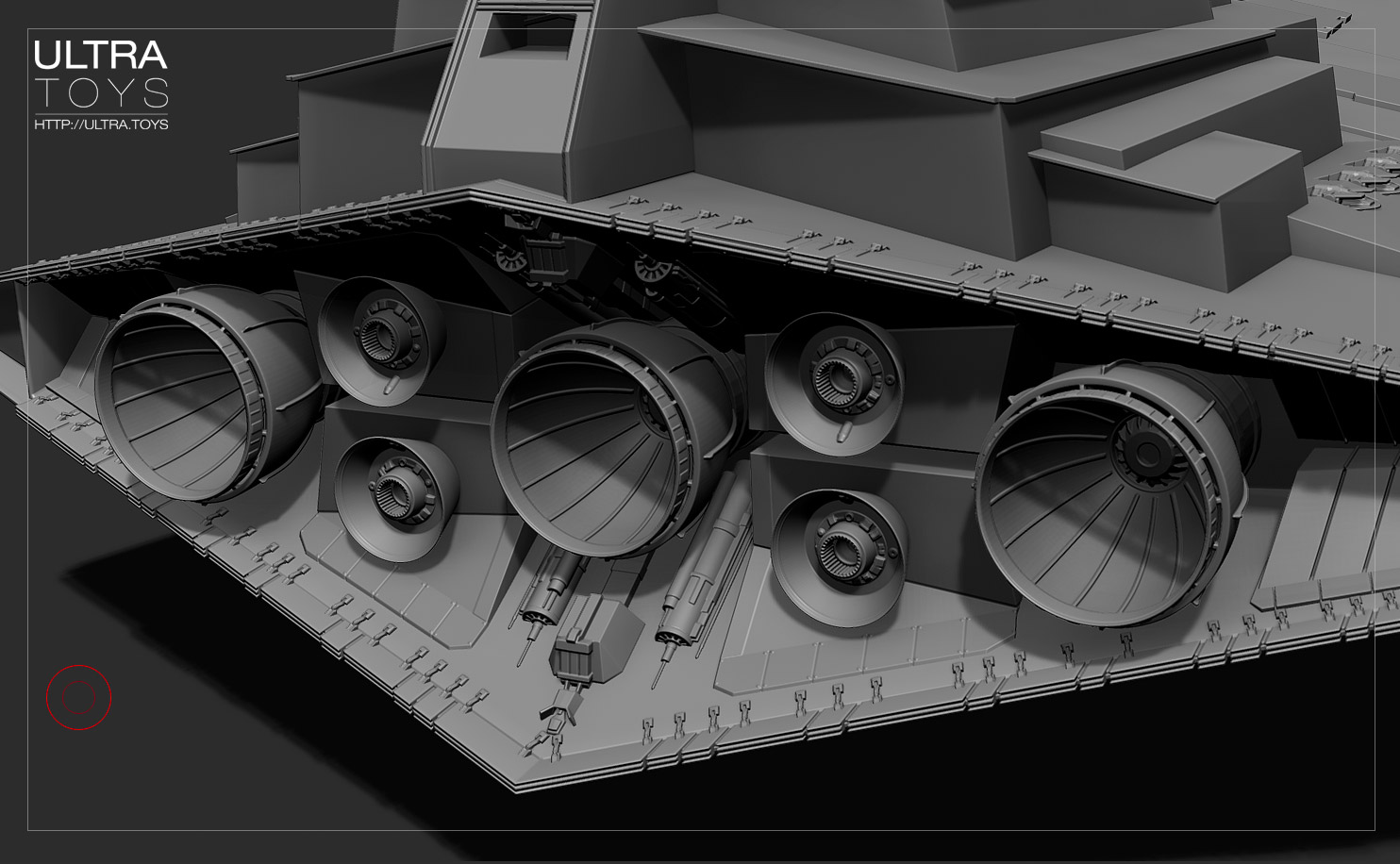 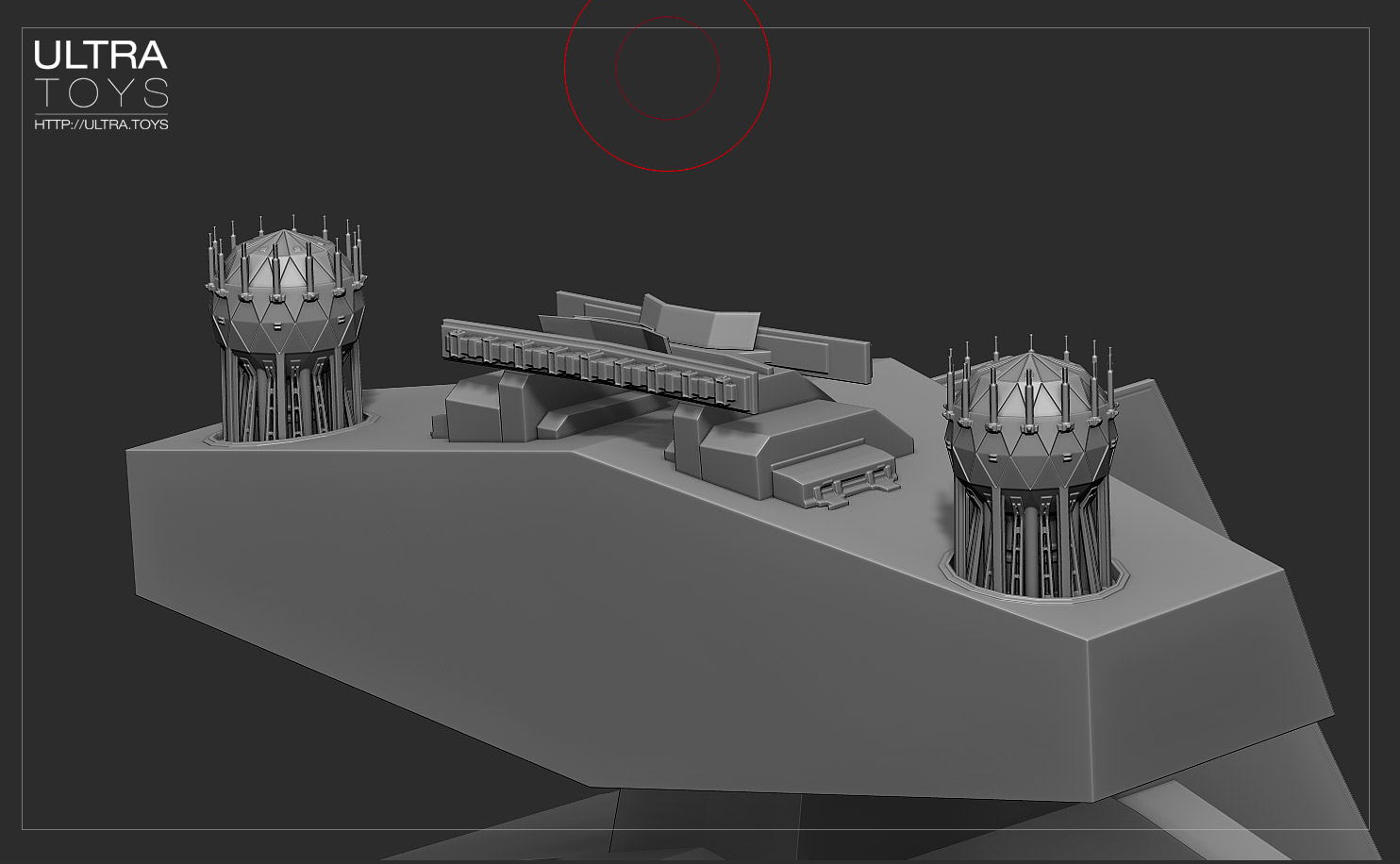